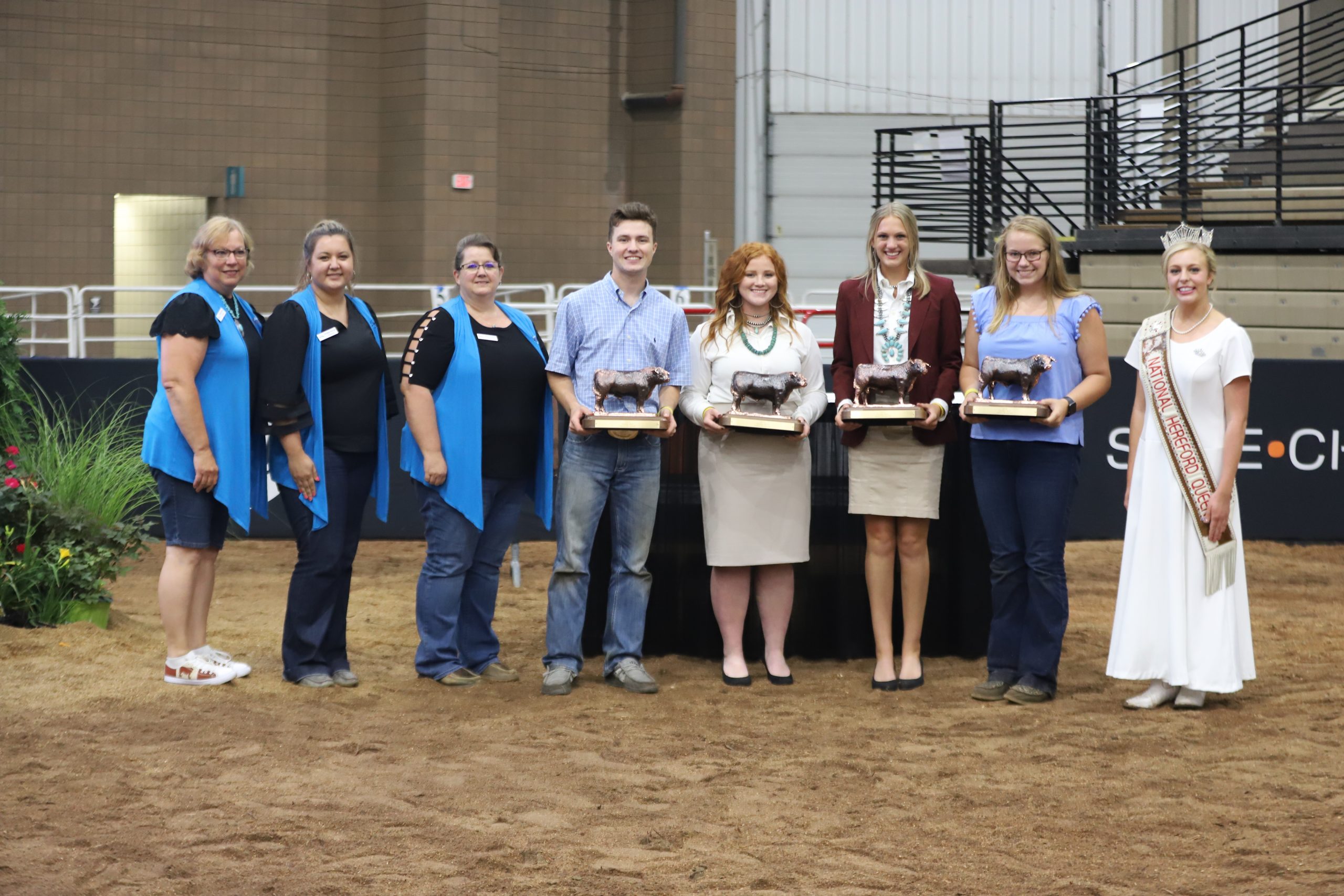 KANSAS CITY, Mo. - Outstanding Hereford youth were awarded numerous scholarships during the 2020 VitaFerm® Junior National Hereford Expo (JNHE) in Kansas City, Mo. The Hereford Youth Foundation of America (HYFA) and the National Hereford Women (NHW) awarded $25,000 alone at this year’s JNHE, and will award a total of $200,000 in 2020 to deserving junior members to aid in their academic endeavors.

The Prospect and Golden Bull awards recognize individuals for their involvement in the Hereford industry, agriculture and their communities. The NHW and the NJHA sponsor these awards. Prospect awards go to students in fourth through eighth grades and the Junior Golden Bull awards go to students in ninth through 12th grades. Prospect winners are given a leather halter with a nameplate, while the Junior Golden Bull winners receive a bronze Hereford bull statue. The Golden Bull Achievement is given to collegiate students. These students receive a bronze Hereford bull statue and a scholarship.

The John Wayne Memorial scholarships are awarded to NJHA members who surpass the norm with their contributions to agriculture and the Hereford industry, as well as their moral character. HYFA and the NHW sponsor these annual scholarships.

The annual National Junior Merit scholarships recognize exceptional members for their dedication to bettering the Hereford industry. The scholarship program is designed to encourage individual and cooperative effort, enthusiasm, excellence, leadership and achievement amongst youth in order to develop reputable breeders for the good of the Hereford business and beef industry. The first-place recipient receives a scholarship plus an all-expenses-paid trip to a Hereford operation in the continental U.S. sponsored by American Livestock Inc.

First place – Wyatt Lawrence, Princeton, $2,000 plus a trip to any U.S. Hereford operation

Sponsored by the HYFA in cooperation with Hereford herdsmen, these scholarships recognize NJHA members who take great pride in exhibiting their Hereford cattle and reward their dedication to the breed through scholarship.

This scholarship honors an exceptional for overall achievement in various facets of NJHA. Junior members are selected based on a point system for NJHA programs and activities weighted heavily on leadership, teamwork, skills and competition.

Funded by HYFA and managed through the NHW, the Poll-ette Founders Scholarship recognizes Hereford juniors who have made significant contributions during their NJHA career. Additionally, the scholarship honors the women who laid the foundation for the National Organization of Poll-ettes, which combined with the American Hereford Women in 2009 to form the NHW.

In honor of the late longtime American Hereford Association employee and Hereford historian, the B.C. “Bud” Snidow Award is awarded to a commendable NJHA member who demonstrates the characteristics Snidow admired most — honesty, fairness, hard work, enthusiasm and dedication to the Hereford breed and its members. This annual award is presented by the NHW, and the recipient receives a custom hand-crafted belt buckle.

Charles E. Boyd Sr. was a third- generation Hereford breeder who mentored youth in the agriculture industry and was recognized on local, state and national levels for his accomplishments throughout his lifetime. He was a prominent beef cattle judge at all major livestock shows and exhibited several international and national champion Hereford cattle. He lived his life selflessly, giving to others without recognition. The Charles E. Boyd Sr. Memorial Scholarship continues to help Hereford youth who plan to attend college and pursue a degree in agriculture.

The Ohio and Kentucky Hereford Associations along with HYFA sponsor the Bluegrass and Buckeye Scholarship through gratuitous funds from the 2006 JNHE in Louisville, Ky. The scholarship’s goal is to provide recognition for one outstanding member of the NJHA. In order to receive the honor, applicants must first be nominated by their state junior association advisor.